Let your women keep silent in the churches, for they are not permitted to speak; but they are to be submissive, as the law also says.

This is one of the passages that is used as a deal-clincher in the debate about women in ministry. As we see, Paul clearly is saying that women should not be the speakers in church.

Or at least, that’s what he is “clearly saying” if we only read one verse and stop. END_OF_DOCUMENT_TOKEN_TO_BE_REPLACED

Posted by Amanda Beattie on April 20, 2010 in 1 Corinthians, Bible, Theology, Women in Ministry

Blame: The Game Where Everyone Loses 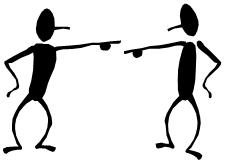 People have been blaming each other for as long as there has been something worth blaming someone else for. Clear back in the Garden of Eden, we see the first man and woman, coming off of the first sin, already explaining why their sin was not entirely their fault. Adam blamed his sin on his wife and on the God who put her on earth with him. Eve blamed her sin on the serpent. Both were seeking to justify their actions based on the actions of others around them.

Neither excuse held any water before the Lord.

Their claims even had some merit on a surface level. Would Adam have eaten the fruit if Eve didn’t do it first? Would Eve had even considered trying it had the serpent not come along?

Maybe, and maybe not. We don’t know for sure. But God did not look at the logical chain and go, “Oh, so it’s all the serpent’s fault then.” He dealt with Adam and Eve individually for the real choice they each had to make before taking a bite. The serpent could not “make” Eve try the fruit. She chose to do so. Eve could not “make” Adam partake with her. He chose to do so. Each were responsible for their own sin.

Most of us are pretty familiar with this concept. But I’ve been considering this lately as it pertains to two pretty touchy areas: body image and lust. END_OF_DOCUMENT_TOKEN_TO_BE_REPLACED

So have you ever had one of those times where the Lord highlighted something to you totally out of the blue? You know… you’re minding your own business, tending to some task, and then something pops out at you in that task which answers a question you have, but weren’t even actively asking.

I’m probably not making sense. ANYWAY, the point is that I think I had one of those moments tonight. END_OF_DOCUMENT_TOKEN_TO_BE_REPLACED

Posted by Amanda Beattie on March 17, 2009 in Bible, Intimacy with God, Theology, Women in Ministry

When approaching the issues of gender and leadership, we have to use caution with what sort of baggage we bring to the discussion. Namely, we tend to approach this from a very Western, very Greek mindset. While there are a lot of beneficial things that have worked into our culture from the logical, analytical thinking of the Greeks, there are a whole lot of off-the-wall things as well.

First, there’s just the fundamental issue of male and female. Or, perhaps more accurately, male versus female, which is part of the problem. END_OF_DOCUMENT_TOKEN_TO_BE_REPLACED

Posted by Amanda Beattie on October 23, 2008 in Women in Ministry

Okay, maybe not all of you… but The Post Some of You Might Be Kind of Interested In, Assuming You Remembered It’s Coming is a much less compelling title. Anyway. This is the post where I intend to unveil the “mystery study subject” that I’ve been kind of cagey about lately. Drumroll please… END_OF_DOCUMENT_TOKEN_TO_BE_REPLACED

Posted by Amanda Beattie on October 5, 2008 in Bible, Theology