When approaching the issues of gender and leadership, we have to use caution with what sort of baggage we bring to the discussion. Namely, we tend to approach this from a very Western, very Greek mindset. While there are a lot of beneficial things that have worked into our culture from the logical, analytical thinking of the Greeks, there are a whole lot of off-the-wall things as well.

First, there’s just the fundamental issue of male and female. Or, perhaps more accurately, male versus female, which is part of the problem. Women were not honored in Greek culture, not one bit. It was common knowledge that women were weaker in body and mind, more prone to hysteria and evil. Some of the ancient Greek legends actually claimed that women were created as a form of punishment for men (who had previously lived blissful, all-male lives), a sort of necessary evil they could neither live with nor without. As a result, a woman’s place was at home, within the safety and confines of her husband’s four walls. She was to be kept under thumb and was pretty much only good for keeping the house and producing children. The best wives were ones that were seen and not heard, who worked really hard and were physically available whenever their husbands wanted — although it was common and accepted for Greek men to go out and hire a lady friend for entertainment when they really wanted to satisfy their craving for intimate pleasure.

Although such ideas are clearly preposterous today, Greek philosophy has so profoundly impacted Western thinking that we can be very unaware of how much of it still trickles down into our culture. You only have to look as far back fifty or sixty years to see some really bizarre thinking on what the ideal woman’s role in society is (i.e. June Cleaver vacuuming the house in high heels and pearls). A large number of women overreacted to the stereotypes, and gave rise to the modern, equally unhealthy movement of radical feminism. Now we have people reacting to the reaction, and we subconsciously uphold the older standard to be what is actually right and godly for a woman to be like.

We have a lot of ideas of what a healthy male/female society is — yet few of our ideas actually come from the Word. We see what has always been the way of life in our culture and assume that it is automatically right and good. It’s true that radical feminism, as we see it today, is not biblical. But neither is June Cleaver. Actually, I think you would be hard pressed to point to any one subculture of women and say, “Now that’s how the Bible says to do it.”

In short, we have built an awful lot of theology on not very many Bible verses. The Bible does not say much in regards to the distinction of gender personalities and roles. We buy into the rhetoric of psychologists and social analystis, some of which is correct but none of which started in the Scripture. If we aren’t careful, we can get an idea of a sort of godly utopia that is really a religious-sounding incarnation of our comfort zone, whatever that may be.

I think a lot of confusion on this issue arises from how we have over-compartmentalized the genders. Again, this is a very Greek concept, drawing hard lines and making things fit into neat boxes and files. This works great for math, pretty well for logic, but it gets a little shaky when you try to cram real living people into little boxes and files. While we have identified some true male and female traits by this process, we have also tended to polarize the genders WAY too much. Now this is not to say that men and women are exactly the same. There are clear physical, emotional, and to a degree, mental differences. But we’re not talking about two different species. We’re talking about unique reflections of the glory of God in the only creatures He designed in His image.

To help show what I mean, I made a little chart with some of the more common male/female sterotypes: 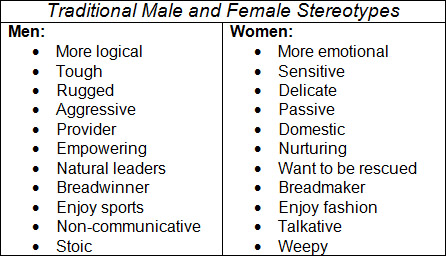 Some of these points are generally true of men or women. But though they’re generally true, that doesn’t make them a hard and fast rule. I’ve met a lot of very logical women in my day, as well as a lot of sensitive men. I’ve met some girls who are crazy about sports and some guys who really get into interior decorating. And for the record, none of the aforementioned people had any confusion regarding their gender. Just because some of the above points are common traits doesn’t mean they’re universal traits, and it certainly doesn’t mean they’re biblically mandated traits.

But in general, we see lists like the above, or we read books or hear preachers on the radio, and often times feel like we need to measure up to what a real man or a real woman is. We hear all these virtuous things about how men are strong providers and women are tender nurturers, and then we see all the areas in which we don’t match the model.

Recently, however, I was struck by how laughable such a mindset is. Think about it. “Male” and “female” aren’t goals — they’re descriptions. It’s kind of like taking a personality test. For instance, on the Myers-Briggs test, I come out as an INFJ. I don’t then go look up the profile, read all about INFJ’s, and then try to be the best, most INFJish INFJ this earth has ever seen. I don’t start a study group with other INFJ’s to pursue growth in our INFJness. “INFJ” doesn’t tell me what I should be like; it tells me what I already am like. There may be some ways in which I don’t line up with the INFJ profile, but that doesn’t now mean I’m failing as a human being because I don’t operate in perfect accord with Myers and Briggs’ opinion of me.

Likewise, God did not create me and then command me to be as feminine as I could. He made me female. That means there are certain things that are true about my mindset, my emotional chemistry, and my physiology. I don’t have to try to be feminine. I just am. It’s the way God built me.

Now, this is not to say that things can’t get broken in the area of gender identity. People despise and reject things about their own gender all the time, and that’s a heartbreaking area of injustice in this earth. But even so, this cannot fixed by trying to be a better man or woman. It’s only corrected by pressing into the Lord and finding out His heart for us. Being more truly ourselves (male or female) only happens when we are more intensely pursuing the Lord. So instead of stressing over what it means to be male or female, we ought to focus on what it means to be like Jesus. That godliness will be manifest in each believer in a uniquely male or female way, but it’s not something that can be contrived — it just happens. The more we are conformed to the image of Christ, the more we will function as the healthy, whole human being He created us to be.

Biblical manhood means that men lay down everything to be more like Christ. Biblical womanhood means that women do the same. The Sermon on the Mount applies to everyone equally. The First and Second Great Commandments are the same for both genders, and Jesus said all the law is summed up in these. It really is a lot simpler than we’ve made it.

This post is already pretty lengthy, so be looking for part 2 in the next few days. I want to discuss how leadership looks through our cultural lens versus how it looks in the Bible, and how that affects our view of the way men and women should participate in it.

Posted by Amanda Beattie on October 23, 2008 in Women in Ministry